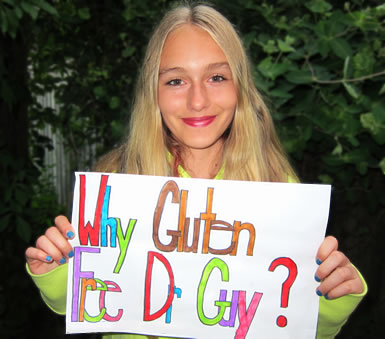 The Hidden Dangers of Gluten

Gluten-free: it’s a buzzword that’s sweeping the nation, but is it more than just a foodie fad? The trend seems to be taking over: step inside any supermarket and you’ll find a plethora of gluten-free products; schools around the country are restricting wheat-laden treats; and gluten-free menus are popping up in restaurants everywhere. Chances are, you know someone who suffers from gluten sensitivity or celiac disease. And quite possibly, you yourself are unknowingly falling victim with every bite. Gluten, a protein found in wheat, rye and barley, helps bread rise and gives baked goods their chewy, fluffy texture. It’s in our breakfast cereal, our sandwich bread and our dinner rolls. It’s even hidden in our ice cream and candy bars. But it’s being avoided like the plague by an ever-increasing number of people.

Wheat, one of America’s most cherished crops, has long dominated the foundation of the food pyramid. So if we’ve been eating this presumably healthy grain—along with its gluten—for generations, why is it suddenly making so many people sick? And why is wheat outside the US suspiciously more innocuous than our own?

I believe the answer to these questions resides in a piece of history that most people are unaware of. In the 1950s, in an attempt to end world hunger, American agronomist Norman Ernest Borlaug began developing new varieties of wheat in Mexico that were resistant to the diseases that plagued wheat crops. By 1962, he had effectively cross-pollinated the wheat a whopping 8,156 times in only 15 years, a feat that would have taken nature thousands of years to accomplish.

The end product consisted of six semi-dwarf, high-yield, disease-resistant wheat varieties that “were going to save the world from starvation,” according to the press. The seeds were shipped off to hungry countries, and by 1968, Borlaug’s varieties were producing enough to feed all of Pakistan and India. In 1970, this increase of the food supply, dubbed the “Green Revolution,” landed him the Nobel Peace Prize.

Today, Borlaug’s wheat varieties dominate the entire US supply. Coincidentally, the rates of autoimmune diseases have risen from 21% in 1975 to an incredible 93% in 2000. Even Borlaug himself died of lymphoma in 2009. And celiacs disease, a gastrointestinal manifestation of gluten sensitivity, has increased 400% over the last 50 years according to the New England Journal of Medicine. So, what’s changed? Certainly not our genes.

While ending world hunger is a humbling endeavor, messing with the genetics of our food supply comes with its own set of problems. Borlaug designed his wheat to have heavy heads of enlarged grains supported by thick, dwarfed stalks. This “dwarf” wheat was, by definition, a mutation. The wheat’s genes were drastically changed in a short amount of time, and our bodies simply haven’t had time to adapt. Without any research into the possible side effects, our country has been ingesting this mutant wheat (and thus, mutant gluten) for breakfast, lunch and dinner for decades.

While we’re still unsure how this mutant gluten came about during the hybridization process, we do know the mechanism that occurs after it enters the human body. First, gluten acts like a toxin, much like the toxins found in cholera, by stimulating the release of a chemical in the body called zonulin (pre-haptoglobin 2). Zonulin causes the tight junctions in our intestinal wall—which normally protect us from toxins leaking into our blood stream and lymphatics—to open wide for five hours or longer.

I liken this to a screen door in the height of mosquito season. Just as the screen allows air to pass through freely, but keeps out bugs and mosquitoes, the gut allows nutrient absorption while blocking undigested food particles, toxins and waste from entering the bloodstream. But when the gut, a typically impenetrable barrier, takes on the appearance of a screen full of gaping holes, you have what is known as increased intestinal permeability, or “leaky gut.” In short, your body is like a house filled with stinging insects.

Leaky gut then causes a war within your body as your immune system attacks these rogue toxins. According to an article entitled, “Surprises from Celiac Disease,” from the August 2009 issue of the Scientific American Magazine, this is found to be a major cause of autoimmune diseases.

To make matters worse, zonulin is produced on chromosome 16, which is associated with autoimmune diseases like lupus, type I diabetes, rheumatoid arthritis and cancers such as lymphoma, myeloid leukemia, breast and prostate. When zonulin is stimulated, chromosome number 16 can be turned on, opening the door to these diseases.

So, is avoiding gluten just a trend? As the research shows, the American diet, rich in wheat-based glutinous foods, is wreaking havoc on our health. As disease rates rise and life expectancies plummet, it’s time we turn away from the pills that only disguise our symptoms and instead take a good look at what we’re putting on our plates. I’ve seen firsthand the ill effects of gluten on my patients, my family and myself, as well as the incredible healing and transformation made possible by eliminating gluten (which is not as hard as one may think). If science tells us that going gluten-free can prevent a disease-stricken life, it may be one bandwagon worth jumping on.

At the DaSilva Institute of Anti-Aging, Regenerative & Functional Medicine, we offer specialized testing to detect leaky gut and gluten sensitivity, as well as nutritional advice and natural therapies to heal the gut and reverse autoimmune diseases. To set up a visit, please call our office a call at 888-832-7458.

Many Faces – One Cause in Gluten Sensitive Patients

Gluten free… it’s not just a fad, but may actually save your life