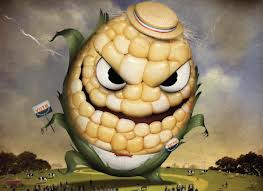 GMOs: The Poison On Your Plate

America may have the priciest healthcare system in the world, but our people are some of the sickest. Over the past 20 years, diseases like cancer, diabetes, depression, heart disease and gastrointestinal issues have become epidemic in the US. Since the mid-1990s, the number of Americans suffering from at least three chronic illnesses has nearly doubled. Our international ranking for infant mortality has increased, and our ranking for lifespan has plunged. And despite all of the money and technology pushed into medical research, Americans get sick more often than those in other industrialized countries. And every year, we continue to get sicker.

So what’s changed over the last few decades? The answer may be in that salad you had for lunch. Our food has drastically changed, most radically through genetic engineering. We’ve gone from consuming whole foods grown by local farmers to eating toxic, mass-produced, food-like products created in a lab. And we are paying the price with our health.

GMO stands for “genetically modified organism,” created by taking the DNA from one species (i.e. bacteria, viruses, humans, animals) and forcing it into another species (i.e. corn) to introduce a new trait. The result is a mix-and-match of two species that would never have mated or crossbred in nature, like injecting the genes of a spider into a cow.

Today, mutant crops have been planted in hundreds of millions of acres, containing genes that allow them to resist and/or produce insecticides in the hopes of larger yields and profits. According to the Non-GMO Project, the most at-risk crops currently in commercial production are:

One of the major companies heading the charge for GMOs is Monsanto, a biotech corporation that manufactures the popular weed killer Round-Up and is a leading producer of genetically engineered seed. This is also the same company that told us in the 1940’s that DDT and Agent Orange were safe.

For 20 years, US consumers have been eating GM foods that the FDA says should not be consumed until proven safe. But the FDA is pro-biotechnology, and leaves the necessary research in the hands of Monsanto. In a letter to Monsanto, the FDA writes, “Monsanto’s responsibility is to ensure that foods marketed by the firm are safe.”

So despite the conflict of interest, Monsanto is responsible for researching the safety of the very GMOs they create and profit from, even though feeding cycles are far too short to identify risks like cancer, birth defects or reproduction issues. So we, the consumers, become the canaries in the coal mine.

Let’s look at just one example of how GM food causes health issues. Here’s how the process works with corn:

First, genes from a bacterium called Bacillus thuringiensis (Bt) is injected into corn cells to produce a toxin protein insecticide. Every cell in the corn, including the kernels that we consume, begin naturally producing Bt. The insecticide, which breaks open the stomachs of insects who take a bite, literally grows within every cell of the corn and cannot be washed off.

I believe that it is the introduction of Bt toxin that is causing the spike in gastrointestinal issues. A recent study on the health effects of Bt toxin in humans confirms that Bt breaks open little pores in human gastrointestinal cells, the same type of destruction it inflicts on insects.

A frightening study in Canada recently revealed that 93% of pregnant women and 80% of the unborn fetuses had Bt toxin in their blood. Even worse, the Bt toxin-producing genes may become embedded within our gut flora, leading to a continuous production of Bt toxin from the bacteria within our own bodies.

GM foods may also be the reason why a major study from the Mayo Clinic found that the incidence of full-blown celiac disease has increased by 400% in the last 50 years. Certainly our genes didn’t change in that time span. But our food has.

This finding may explain why a condition called intestinal permeability (leaky gut) is also on the rise. Leaky gut occurs when a disruption of the normal intestinal barrier allows undigested food particles to enter into our blood stream, setting off an immunological response that includes the over-production of antibodies. This cascade of immune attacks leads to food intolerances and allergies as well as inflammation, heart disease, and other chronic diseases.

WHAT CAN I DO?
At this point in time, GMOs have not been proven safe for human consumption, yet we continue to eat them. While other countries label and ban GMOs, the US welcomes them with open arms. And if we continue to buy GM food products, retailers will continue to stock them and manufacturers will continue to use them. Change starts with us, so here are some tips to help keep your family and our country GMO-free.

Grow your own food with these GMO-free seed companies:
http://www.seedsavers.org/onlinestore/Organic-Heirloom-Vegetable-Seeds/

2. GET INVOLVED
It is our responsibility to educate ourselves about the food we are feeding our families. Proactively researching, writing letters, signing petitions, attending marches and spreading the word to friends and family can make a big impact. If we want our government to up regulations, require labeling, or ban GMOs altogether, we need to raise our voices and stop caving to GMO foods.

3. REVERSE THE DAMAGE
If you feel you may have developed health issues from GMOs, including autoimmune diseases, leaky gut, gastrointestinal problems, cancer or other chronic illnesses, please contact the DaSilva Institute of Anti-aging, Regenerative & Functional Medicine at 888-832-7458. We can provide in-depth testing to determine the root cause of your illness, as well as natural treatments to repair your immune system and regenerate damaged tissue caused by GMOs.

The sooner we stop eating poison for dinner, the sooner we can discover health without limits. Here’s to your health!

Gone with the Gluten

The Hidden Dangers of Gluten